I’ve done a few storytimes in the past few weeks, but I am catching up on posting them!

For my first in-person Preschool Storytime back at the Library, I decided to go with a chicken theme, mostly because I was excited to read Atinuke’s Catch that Chicken!  Because it’s been so long since I’ve done a storytime, I relied heavily on this blog and some past chicken storytimes I’ve done.  I feel so out of practice!

I wanted to start things off fun and interactive, so I thought this song would be a good starting point to put the storytime in context of a farm

Catch that Chicken! by Atinuke, illustrated by Angela Brooksbank 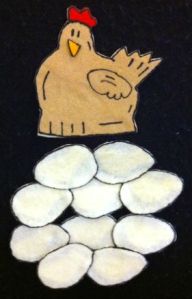 Five eggs and five eggs
(Add a clutch of eggs each time you say “five eggs”)
And that makes ten
Sitting on top
(Add the hen)
Is Mother Hen
Cackle cackle cackle
(Clap hands as you say Cackle!)
What do I see?
Ten fluffy chickens
(Flip over each clutch of eggs.)
Yellow as can be.

This one is fun because you can do it as both a flannelboard, and a fingerplay – it works on both levels!!!  We repeated this one a couple of times so that families could get the hang of it.

Said the first little chicken, with a queer little squirm,
“I wish I could find a fat little worm.”

Said the second little chicken, with an odd little shrug,
“I wish I could find a fat little bug.”

Said the third little chicken, with a sharp little squeal,
“I wish I could find some nice yellow meal.”

Said the fourth little chicken, with a sigh of grief,
“I wish I could find a little green leaf.”

Said the fifth little chicken, with a faint little moan,
“I wish I could find a wee gravel stone.”

“Now see here,” said the mother, from the green garden patch,
“If you want any breakfast, just come here and SCRATCH!”

Start with mother hen on one side of the flannelboard, near the garden. (I noted back when I did this flannelboard in 2015 that I needed to remake my pieces to make the garden patch green instead of brown.  Obviously I still haven’t done that…) Make slits in the garden where you can put the things the chicks are looking for.  Add each chick when you get to it.  Then after you’ve read the poem, see if the children can remember which chick wanted which treat, and match them up accordingly.

Other Verses:
Fly up high: fly fly (jump up in air)
Scratch with your feet: scritch scratch (drag one foot along ground, then other)
Go peck peck: peck peck (Make a beak with hand, tap it on the other hand)
Say bok bok: Bok! Bok! (say bok bok)
Settle into your nest: settle settle (sit down and wiggle bottom)

“Shake My Sillies Out” from More Singable Songs by Raffi

OTHER BLOG POSTS I HAVE ON THIS SAME TOPIC:

HOW IT WENT:
This was the first preschool storytime I’ve done in person in more than a year and a half!  I think I failed to account for the fact that preschoolers now haven’t been able to practice sitting still for a while, since the pandemic.  So, maybe I should be aware of this, and start with some shorter stories and then build up to longer ones a few months for now. For the most part, they were able to sit and listen.

There was a little gasp from the audience when I turned over the eggs and they see the chicks there.  That was fun and satisfying, and a really nice feeling.

*To see the words to these movements and activities I use frequently, please visit my
A-capella Movements Section on my Storytime Movements and Music Page